The Best Volkssturmgewehr Class In Vanguard

The Volkssturmgewehr is a rather complex name, but do not be feared, as the last AR you unlock during Vanguard is a heavy hitter.

Here's the best loadout for the Volkssturmgewehr in Call of Duty: Vanguard.

With a staggering, 10 attachments to pick on your weapon, you're truly spoilt for choice.
When choosing your attachments, you'll want to consider what attachments will improve this weapons weak areas and how you tend to play.
The Volkssturmgewehr is one of the more mobile ARs when you first unlock it, and we're going to keep this model the same with this loadout.
Playing like an SMG with this AR is going to be the best way you can find success! 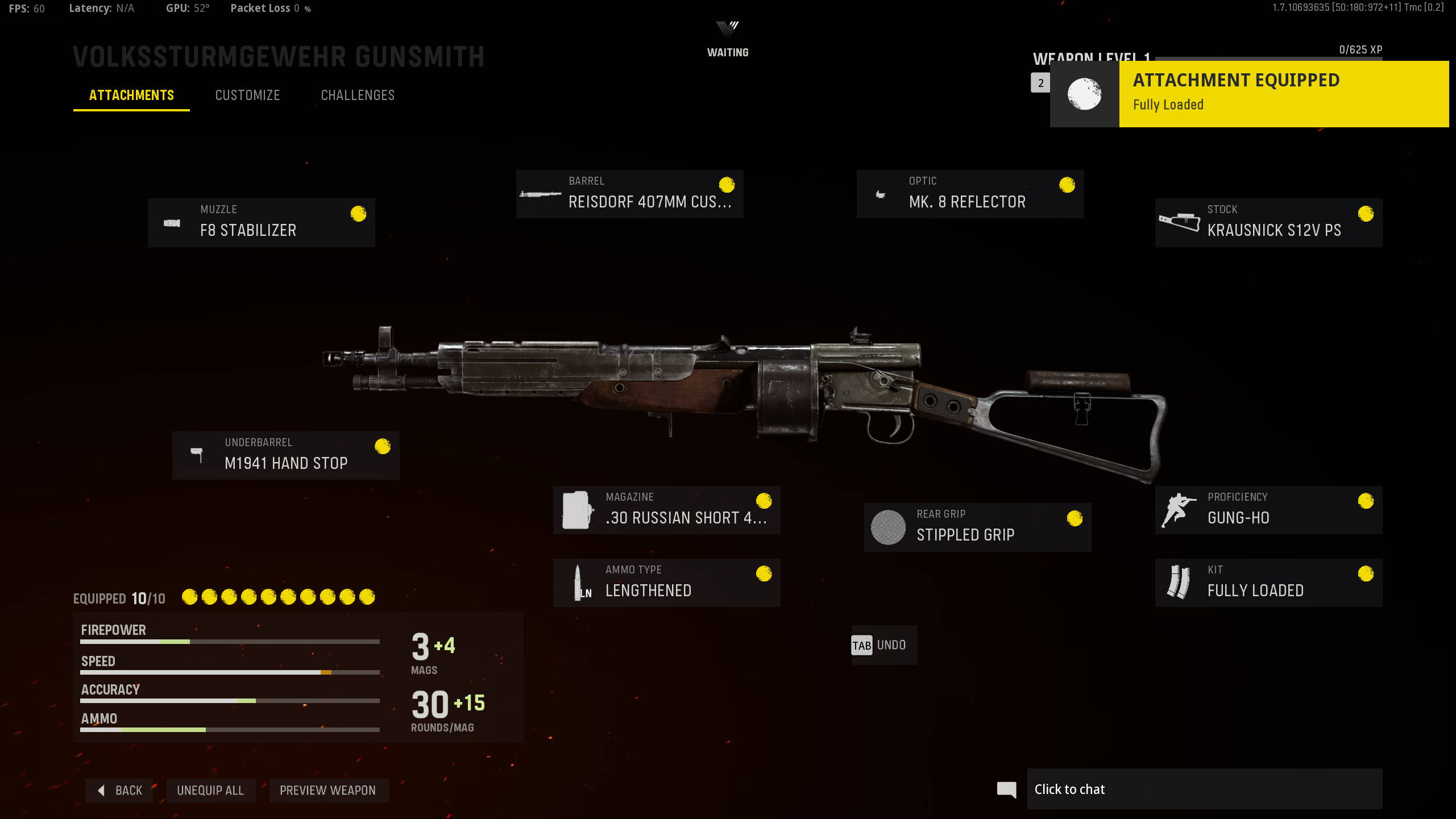 This setup is tailored for up close and persoanl battles when using the Volkssturmgewehr, as it is after all, the most SMG like among the ARs.
There's some Muzzle attachments that are decent for the Volkssturmgewehr, but we've chosen the F8 Stablizier is null out some of the increeased recoil the weapon has at the start.
Your Barrel choice comes down to the Residorf 407mm Custom or the Krausnick 428mm 05V for the Volkssturmgewehr. We've gone with the 407mm, as it bolsters accuracy and recoil reocvery.
Your Optic comes down to preference in my opinion the MK. 8 Reflector is one of the best within the game.
For Stock, the options are advanced, with a ton of them being decent so you can use other ones such as the SA Converted. But, we've opted for the Krausnick S12V PS, as it bolsters more accuracy and recoil for the Volkssturmgewehr.
The Underbarrel option is one that's subject to change depending as there's some decent options here once again. We've chosen the M1941 Hand Stop for the Volkssturmgewehr.
The Magazine attachments are also not the best, and they all have negative effects to the damage of the weapon besides the 45 Round Short Mags.
We've gone with the Lengthened rounds for this setup, none of the other options are really useable. But, if you want, you can experiment with the FMJ or Subsonic rounds!
More recoil buffs comes into play with the Rear Grip choice we've opted for with the Stippled Grip.
Your Proficiency also has viable options, but Gung-Ho or Fleet are the best options we'd recommneded going towards. Gung-Ho allows players to sprint while firing, which is key for a mobile build. While Fleet simply increases your movement speed.
Your Kit option is going to be Fully Loaded, as you can never have too much ammo.

The MK2 Frag is a staple of COD titles, and will do a decent job at flushing out certain points over the course of a match.

While on the flipside, the Stim Shot will give players a little boost of health when they may need it.

Tracker allows you to see where enemies footsteps are appearing while moving around, giving you a bit of insight into where you may find your next kill!

The third perk is Lightweight, allowing you to move faster throughout the map.

This Field Upgrade is bascially as the name entails, it gives players an added boost of health in the form of a armor plate the player will equip. This can be life or death changing given the situation, and espcially so if you're rocking an SMG. 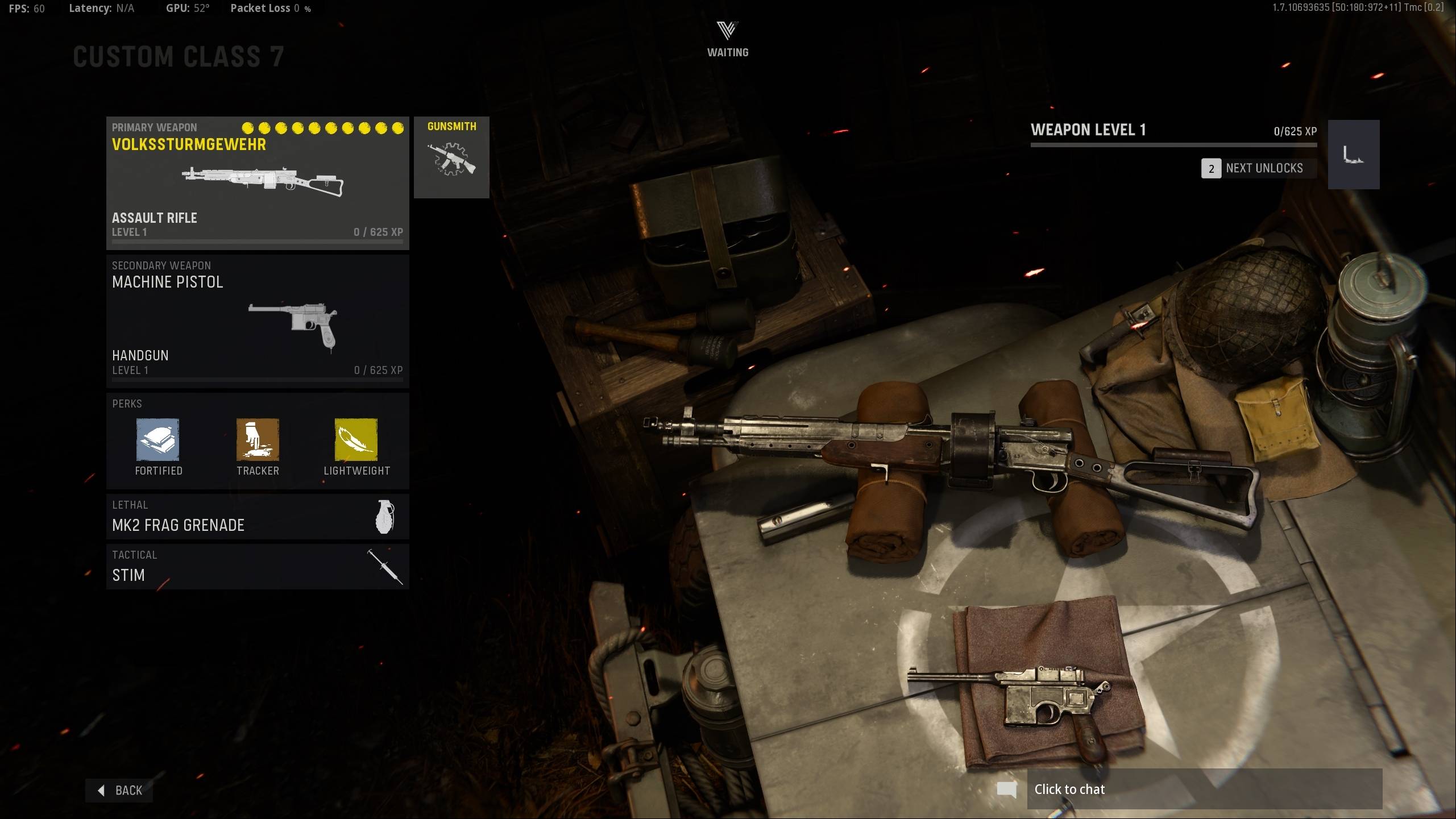