With Warzone Pacific now in the wild for players to enjoy, users are exploring the many weapons available and once again there seems to be a pretty powerful LMG within the game, and this time it's the MG42.

The German 7.92×57mm machine gun has been replicated in nearly every WW2 themed game over the years, as it was a staple of the German army during this era.

Within Warzone, you're able to take full advantage of the MG42 within Gunsmith and you can turn this weapon into a beefy one.

Here's the best loadout for the MG42 in Call of Duty: Warzone Pacific.

With a staggering, 10 attachments to pick on your weapon, you're truly spoilt for choice.
When choosing your attachments, you'll want to consider what attachments will improve this weapons weak areas and how you tend to play.
The MG42 like any other LMG, is best suited for medium to long-range encounters, as it'll hinder your play when it comes to quick movement and ADS due to the sheer size of the weapon.
However, within Vanguard the MG42 packs a deadly punch to enemies and there's certain attachments that'll greatly boost some of the weapons weak points. 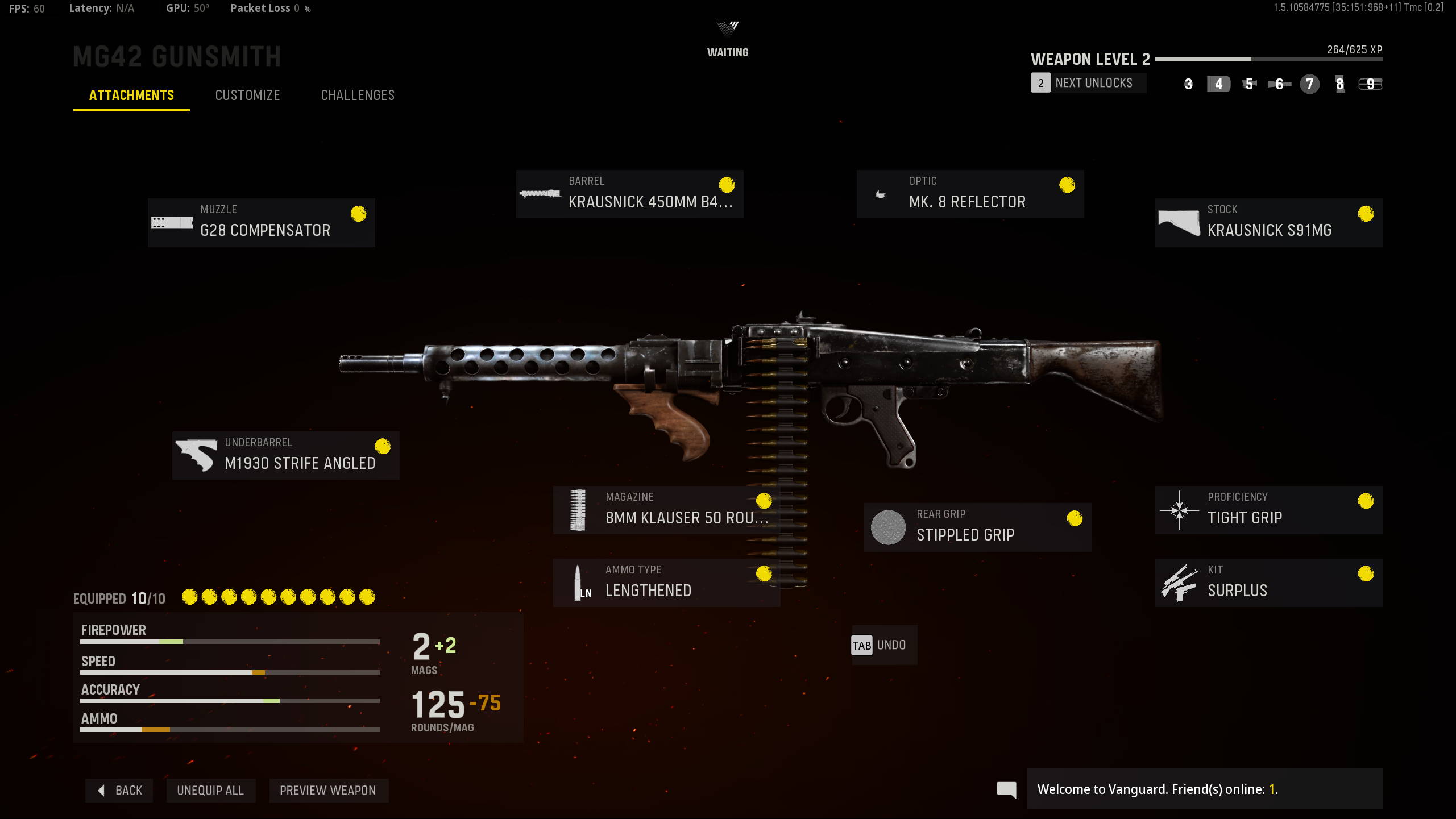 This setup is tailored to best suited for a more defensive playstyle, but it's also built so if you want to get up close and personal with some enemies, you'll be able to do so.
We've selected a bulk of these attachments as they greatly increase the movement and ADS speed of the MG42, while also stabilizing the recoil from the rocky standard it has.
There's some Muzzle attachments that are decent for the MG42, but the G28 Compensator offers a boost to recoil control, so we'll take that one.
Your Barrel choice is straight forward, as the Krausnick 450MM B42MG is the only viable option. It offers significant increases to bullet velocity and range, while also improving the control of the MG42.
Your Optic comes down to preference in my opinion the MK. 8 Reflector get's the job done.
Our Stock choice comes down to the one we've selected, which bolsters ADS and recoil control or the VDD Skeletal.
The Underbarrel option came down to the M1930 Strife Angled or the Carver Foregrip. The latter reduces ADS speed while the one we've chosen has a slight decrease to sprint to fire speed. In my opinion this won't matter too much, as the Strife Angled boosts more categories so it's worth the trade off.
The Magazine attachment is an easy choice, as the other options make the MG42 rather clunky with all the excess ammunition. So, opt for the 50 Round Fast Mags here.
We've gone with the Lengthen rounds for this setup, none of the other options are really useable. But, if you want, you can experiment with the FMJ or Subsonic rounds!
More recoil control comes into play in regards to the Rear Grip. Stippled is the one we've opted for, as it's highly regarded as the superior option, but another viable one is the Leather Grip.
Your Perk 1 comes down to only one real choice, and this is Tight Grip. It gives an increase to your overall accuracy when enemies are shooting in your general direction.
Your Perk 2 options are rather poor for the MG42, and we've identified only two useable ones. Surplus, which simply gives bonus XP and Defender, which gives increases to Mount movement are the best.

However, Overkill is a popular option for players to use, just due to the vast versatility players have when it comes to using other weapons.

The Frag grenade is a solid choice for any scenario and can be used defensively to ward off enemies. The Stun Grenade is fantastic for keeping players on their toes, and if you're able to connect, you're going to be eaasily able to eliminate them.

Double Time grealty increases your movement speed around the map. 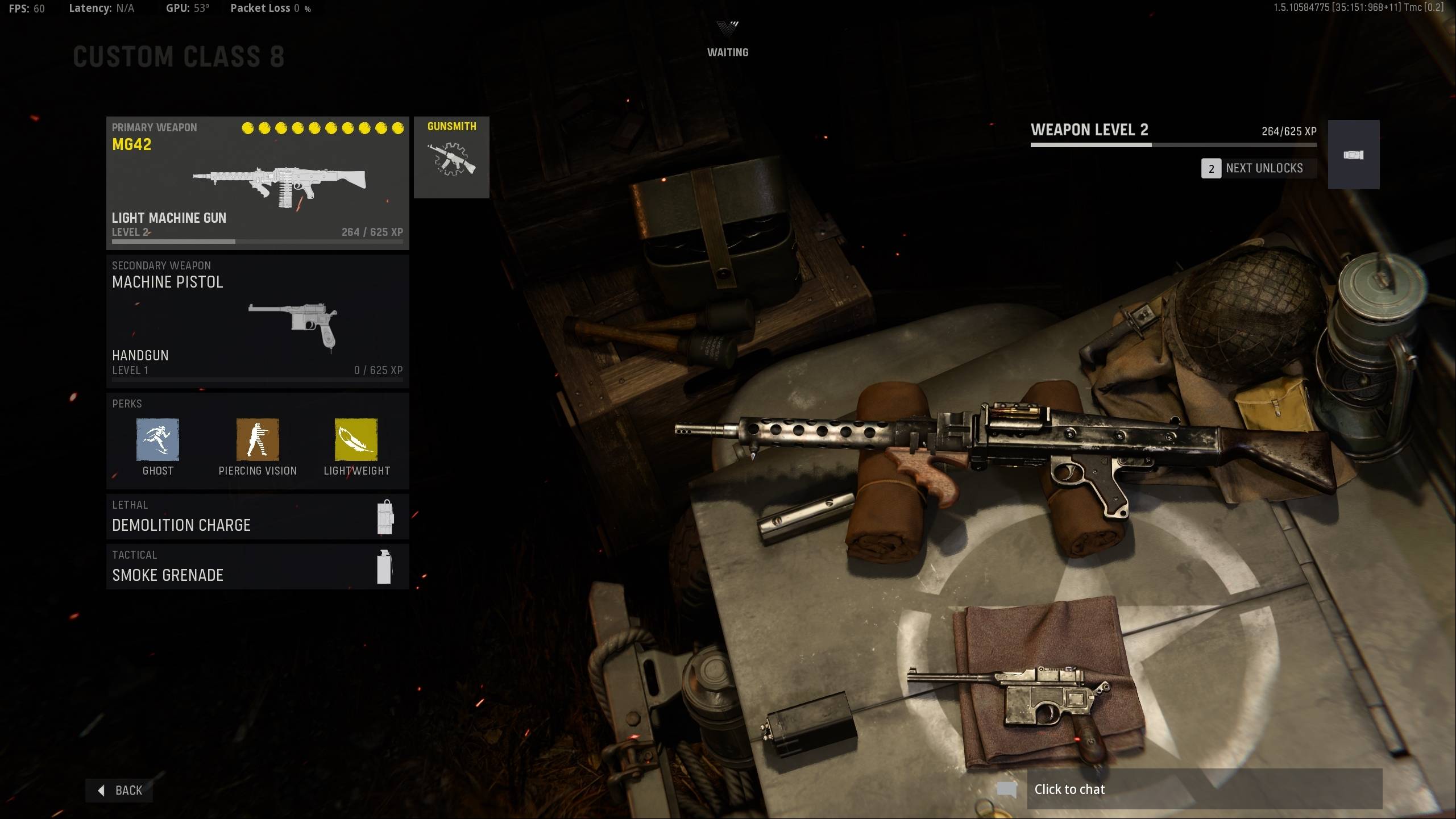