How Do Professions Work In World of Warcraft Dragonflight?

World of Warcraft Dragonflight is the lastest expansion in the iconic series, and fans are amped since the DLC is set to be live soon.

Now, in the leadup to WoW Dragonflight, Blizzard has outlined the changes coming to the professions category within WoW.

Here's what you need to know!

How Do Professions Work In World of Warcraft Dragonflight?

Professions such as Blacksmithing, leatherworking and more are getting revamped for the first time in what feels like forever within World of Warcraft.

Blizzard has outlined the changes in a new blog post, which we're going to runover below.

Crafting orders are a new way for you to place an order for almost any Dragon Isles crafting recipe using an Auction House-like interface. This new service will be provided as nearly free of charge by representatives of the Artisan’s Consortium, a new trade organization recently founded with its first branch in the Dragon Isles. 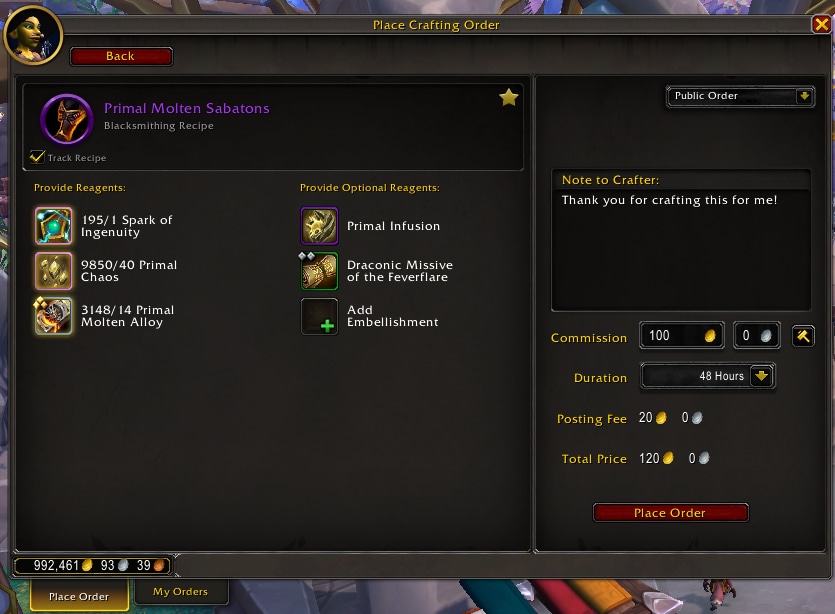 Players will also be able to customize the order further by including various Optional Reagents depending on the recipe, dictating exactly what you want to be crafted. For example, many equipment recipes will allow secondary stats to be specified.

Once an order is finished being customized, the requestor will decide on an offered commission to the crafter, pay a small posting fee, and send it off.

Crafters can then view these orders, fill in any missing reagents, craft the item, and collect the commission (minus a small cut for the Artisan’s Consortium, of course!). The finished item will then be delivered in the mail.

This is a great new way for crafters to earn gold, increase skill, and, most importantly, help craft for friends and guildmates.

Profession specializations will allow crafters to specialize in their primary crafting and gathering professions once they’ve reached a high enough skill. You will earn specialization knowledge through a variety of activities and get to spend it on improving different areas of your profession permanently. 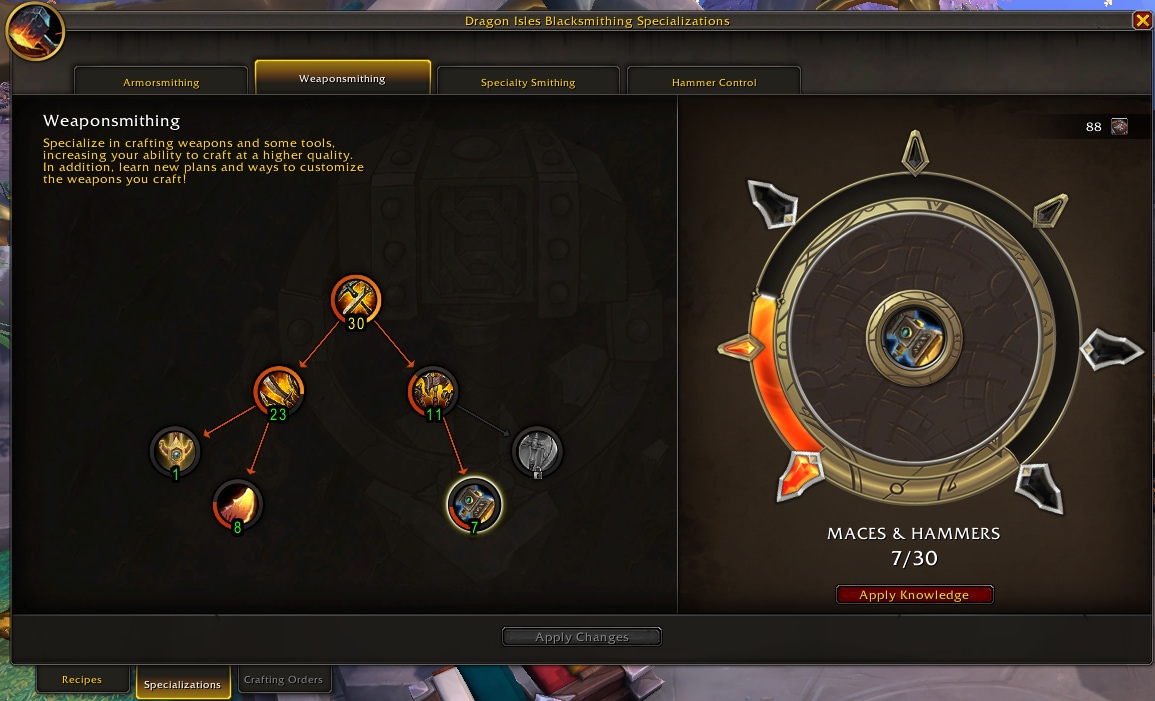 This will be one of the main ways crafters can differentiate themselves from their peers, as there will be many areas of each profession to specialize in.

Crafting and Gathering with Quality

QUALITY AND ITS EFFECTS

New to World of Warcraft is the concept of crafting quality, both for crafted items and many gathered reagents. This is not to be confused with rarity, such as Common, Uncommon, Rare, Epic, and Legendary, which remains unchanged and isn’t directly related to crafting quality.

Crafted equipment will have five levels of possible quality, while many other crafted and gathered items, such as potions and ores, will have three levels of quality. 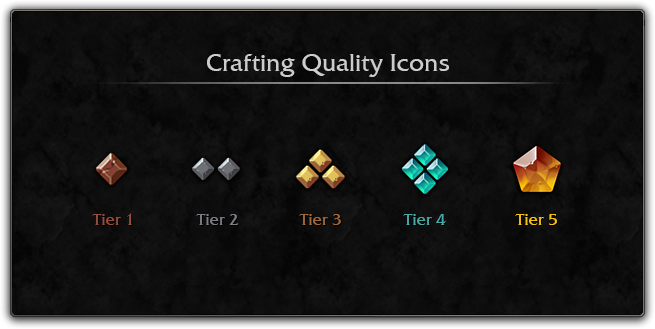 For crafted equipment, quality primarily modifies item level, with each level of quality increasing it by a small amount. For example, a piece of crafted leveling gear might be item level 306/308/310/313/316 at quality

. In all cases, the goal is to have quality matter enough for it to be worth your effort to achieve higher qualities without having the gains be so large that the lowest quality versions don’t feel worthwhile.

For crafted items such as consumables that have quality, the effects of quality are a bit more varied. For most, a higher quality will result in a more powerful effect, but in some cases, it might come in other forms of variation, such as longer duration, more charges, etc. Note that there is an expectation that low-quality versions of these items will sell for less, but this will provide a niche for those who don’t want to spend a lot of gold to be able to make use of the full suite of crafted items. It will also be cheaper to craft lower-quality versions of these items for a variety of reasons.

For reagents that have quality, that quality value will serve as a major input into crafting. Crafting with higher-quality basic reagents will directly provide bonus skill when crafting with them (more on that below).

Finishing Reagents are a new type of reagent that can be used to improve aspects of the crafting process— increasing skill or crafting stats, for instance. Higher-quality versions of these will have stronger effects on crafting.

When crafting an item, there are two main elements of note.

Crafting Skill is determined by the base skill the character has in their profession (e.g. Dragon Isles Tailoring), but can be modified by a variety of factors, including the quality of the reagents in use, Finishing Reagents, profession gear with skill bonuses, various bonuses provided by consumables, and most significantly, profession specialization.

As you craft your item, there is a small amount of randomness added to your skill roll to represent the natural variation in your crafting execution. In addition, if you have any Inspiration—a new crafting stat—you have a chance to become inspired, gaining a significant amount of bonus skill during the craft. This means you may do better than you expected, but never worse!

In the end, final Crafting Skill will be compared against the Recipe Difficulty. If that skill is higher than the difficulty, you will craft the item at maximum quality; otherwise, the quality will depend on where your skill falls comparatively.

In addition to your primary Crafting Skill, there are several secondary crafting stats that can affect the crafting of new Dragon Isles recipes and which gear can be specialized towards. These are as follows:

In Dragonflight, there are many recipes for extremely powerful craftable equipment. Every primary crafting profession can craft one or more pieces, all of which work under a shared system with the following attributes:

ALCHEMY AND PHIALS IN THE DRAGON ISLES

You will find many strange and wondrous concoctions to discover during your Alchemical experimentations on the Dragon Isles. One of these is the standardization of the Phial as an innovative replacement for the Flask. Phials work very similarly to Flasks, lasting through death and counting as both a Battle and Guardian Elixir. The main difference is they tend to require about half the reagents to craft and last half as long, but two can be drunk together to get the duration of a Flask for extra flexibility.

Alchemists who choose to specialize in Phials will discover the secret to making Phials last significantly longer for them.

Reagent Bags and Updated Stack Sizes
With the introduction of quality to crafting and gathering, additional inventory updates have been made regarding professions. To help crafters out, we’ve introduced a brand-new bag, the reagent bag! Reagent bags can only hold reagents and follow the same rules as the reagent bank. These new bags will also exist in a new dedicated bag slot, allowing for a larger amount of inventory space to devote to your gathered and crafting reagents.

In addition to this new reagent-only bag, the maximum stack size for most crafted and gathered items in Dragonflight has been increased. Gathered reagents stack to 1000 (up from 200), and most crafted consumable items stack up to 200, up from 20 (e.g., potions, Optional Reagents, Finishing Reagents, etc.).

Prospecting and Milling Updates
With the new profession updates, new Milling and Prospecting recipes are now listed in each expansion-specific version of Alchemy and Jewelcrafting that you have learned. These recipes will allow you to select which herb/ore you wish to mill/prospect from that expansion, then select create or create all to consume as many or as few of them as you want with a single click.

Profession Equipment
Players will also now be able to gain profession-specific equipment to enhance their gameplay and show off their crafting pride. In the new system, most professions have three slots for equipment— one tool slot and two accessory slots. These slots provide a dedicated place to put your profession equipment. You will no longer need to keep a hammer in your inventory if you are a Blacksmith or switch your weapon with your Fishing rod when you want to fish; these items will already be equipped

In addition to the bonuses it provides, most pieces of equipment can show on your character, letting you look the part of your profession. When you perform a profession-related action, your character will optionally visually swap into this profession equipment, then switch back again upon entering combat.

One green gemmed and one red gemmed jewelcrafting tool with matching head pieces with attached monocular eye piece. There are two full-body aprons with single straps over the shoulders.
Jewelcrafting Equipment
Close up view of two Jewelcrafting head-pieces (green and red gemmed) worn by a night elf. Two more full-length views (red and green gemmed) of a night elf wearing the head pieces, holding the Jewelcrafting tools and wearing a Jewelcrafting apron.
Jewelcrafting Equipment
Mining tools- One copper one steel miner's hat with lit and melting candles on the front brim. Two boxes of tools (light brown and dark brown) with lanterns (steel and copper). Two pickaxes and shovels with one each of copper and steel.
Mining Equipment
Two close-up shots of a night elf wearing the tool boxes on their back with lanterns attached (light brown box with steel lantern and dark brown box with copper lantern), while wearing steel and copper mining hats with melting candles on the front brim. Two full body images from the side of a night elf wearing the hard hats and one holding a pick axe and one holding a shovel.
Mining Equipment
Recrafting and Artisan's Mettle
Recrafting allows you to take Dragon Isles' crafted gear and take another shot at crafting it. It requires the original item, a subset of the original tradeable reagents that went into it, plus in Dragon Isles crafting, a special profession-earned reagent known as Artisan's Mettle:

Recrafting Order UI
As mentioned above, Artisan's Mettle is required for recrafting. This reagent is Soulbound and can only be earned in limited quantities through various crafting and gathering activities. During a crafting order, either the customer or crafter can provide it.

Besides its use in recrafting, Artisan's Mettle also has various other profession-centric uses. Some of these are for crafting high-end profession equipment, Illustrious Insight, a Finishing Reagent that increases skill when used, and some other profession-benefiting consumables. This means that Artisan's Mettle is highly valuable to anyone with professions and that you'll want to be judicious with how you choose to use it.