The first Battlefield 2042 beta offered a slim preview in which players had the chance to try the game's Conquest Mode on the new Orbital map. While the beta only lasted a couple of days and centered around just one game mode and map, there was something players got a good look at: the weapons. Guns were at the core of this beta, and some stood out more than others.

Here are the best weapons from the Battlefield 2042 beta which show the most potential going into the game's release.

It is worth mentioning that weapons in Battlefield 2042 feel noticeably distinct from others in the series. The guns feel more weighty and unwieldy than in Battlefield 3 or 4, meaning shots that we thought should connect, didn't. Snipers, specifically, handled inconsistently, with multiple body shots needed to down enemies but stray leg shots resulting in a one hit kill.

These instances may be bugs that will be ironed out in time for release, or intended features. In either case, Battlefield 2042 feels like it will demand a level of precision from players not seen in other titles in the franchise. 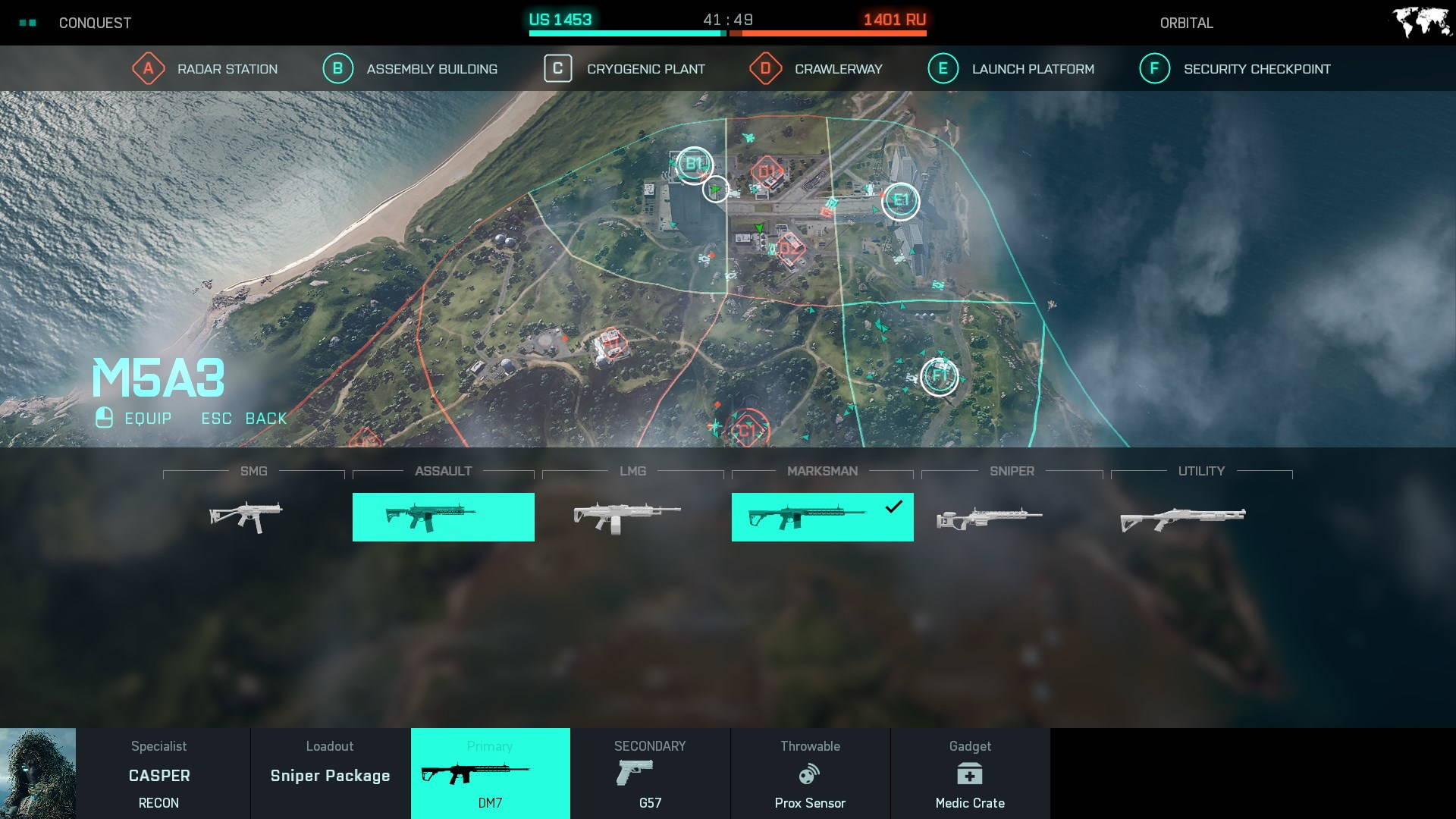 Throughout the beta, it was the M5A3 Assault Rifle that proved the most consistent killer. With the PC, PS5, and Xbox Series X/S versions of the game now having 60 players per team, an automatic gun felt necessary in most situations. The M5A3 even stood a chance against snipers at range. In terms of stats, this automatic rifle appears to be a medium-grade weapon with average stats across the board. But when it comes to a medium-range fight, it's all you'll need.

Orbital is a sprawling map with a lot of potential for ranged fights. And for these fights, you're going to want a DM7. This is a weapon that was built specifically for Battlefield 2042. It's light and maneuverable while still packing a solid punch.

In the beta it proved effective against other snipers, save only for when multiple body shots weren't enough to down them. Battlefield 2042 allows you to switch out a gun's components live during a match by opening up the weapon's menu. Swapping the DM7's scope for different encounters was incredibly useful, transforming it into one of the most versatile weapons in the game. It will be interesting to see if the developers nerf this feature when the game officially releases.

For shotgun lovers, there’s the MCS-880. The MCS was the only shotgun showcased during the beta, but was fairly decent when stacked up against the other guns shown off. The main issue with the MCS is an issue with shotguns in general for this game: wide open maps.

Orbital was a huge map, with most encounters happening at mid-to-long range. Fights in the beta were rarely close enough to an enemy team to make use of a shotgun. Still, for capturing points, the MCS holds a special role in delivering instant stopping power. You'll just need to be quick with your entries and exits with this gun.

The best gun overall from the beta had to be the LCMG. It featured a 100-round magazine of bullets that were powerful enough to stop multiple enemies. Expecting a damage trade off for the amount of bullets in the gun? That isn’t the case. At medium range, the LCMG is a beast. If you have other squadmates near you, the LCMG is perfect for suppressing enemies while they work on finishing them off.