Just barely over a week old, Amazon's recent title "New World" has been the big talk of the gaming community. Both professional streamers and casual players alike have found themselves drawn to the open world environment that offers familiar MMO gameplay with tons of customization options.

We wanted to know a bit more about the first-hand experiences of New World, so we're lucky to have SypherPK share his early thoughts!

What are your initial experiences playing New World for the first week?

There is a lot of hype, both from me and from the community around this game. People have been looking forward to a new MMORPG and New World definitely delivers on a lot of the desires myself and the community wished for. The hype and excitement is definitely there and it’s been exciting to see. I feel back in my element coming from an MMO background, and it feels good to be back in it with a game that has a very unique feel to it while still having core MMO elements. The game seems very polished for a brand new MMO and I’m excited to see what the developers add in the future.

I really enjoy the PvP focus of the game and the faction aspect of it. As somebody who mainly plays video games for the competitive nature of player versus player combat, New World does an amazing job really building the game around PvP combat. I also like that it's not extremely grindy and reaching a max level is obtainable even for a casual player. There are a lot of ways to earn XP in the game that doesn’t involve doing the same 3 types of quests over and over. I also like that you're kind of able to just level up in multiple different ways instead of having to follow a strict path.

So while I do enjoy the PvE aspect, I do feel like there's still not enough incentive for players to enable PvP. You do earn bonus XP and have a chance to earn loot from killing other players, but I barely see any players flagged for PvP while I’m playing. Also while the combat system is unique and fun, there are some glaring issues with combat and some of the abilities. They do feel clunky and unresponsive at times - specifically swapping between weapons or using charging or lunging abilities. They sometimes just completely fail or completely mistrack opponents. Though when it does work, it feels amazing. It's just, there's a lot of times where I noticed that it clearly is not working.

There’s also pros and cons to having 6 active abilities only - 3 per weapon slot. It makes things more accessible to a wider audience which is imo a reason for a decent portion of its early success. It's not overwhelming like other MMOs have been. However, because of the minimized spell lists the skill ceiling is a bit lower. If they keep with only 6 abilities/spells per player, it would be cool for the devs to move towards spell synergy between the two weapon slots. As it stands, several abilities end or passives are removed when weapons are swapped. This discourages people from swapping weapons in fights and stifles creativity for builds. 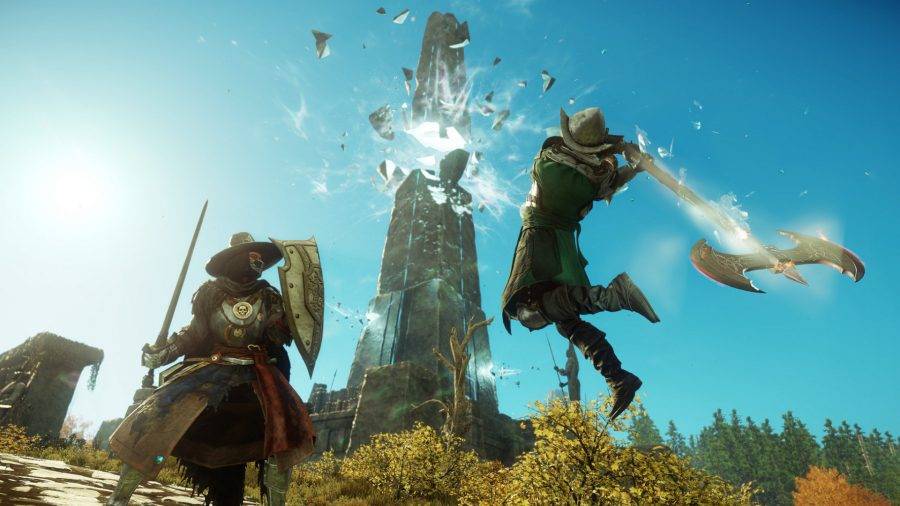 What are your hopes for the game moving forward?

My hopes are more incentives to turn on PvP, more PvP focused updates, potentially adding things like bounty boards, and PvP focused missions to kind of encourage players to participate in that aspect of the game. Adding a PVP-enforced server would be really interesting as I know other MMOs have servers like that for more hardcore players. I also think they definitely need to add a faster way to travel such as mounts or a speed buff while on main roads.